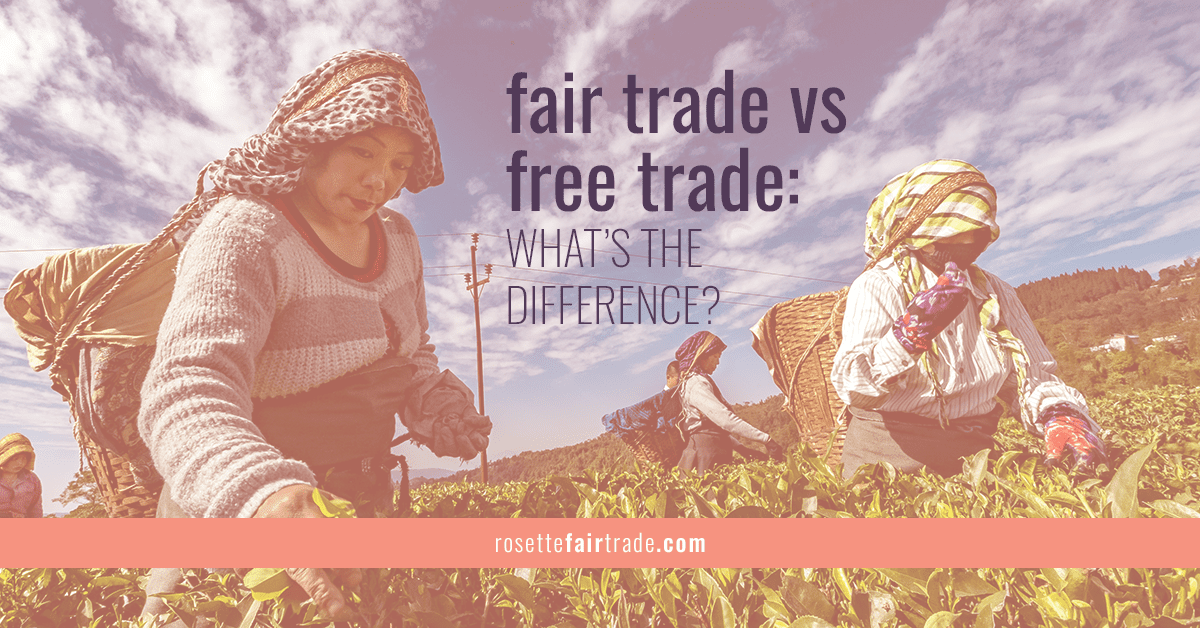 If you start Googling fair trade, one of the first autofills is almost always “fair trade vs free trade.” These two things sound similar in name, so they cause some confusion. But fair trade and free trade (or conventional trade) are very different things. Today we’ll discuss why!

But the issue is that free trade is an idea that doesn’t really exist in practice. (Or if it does, it’s only in extremely rare situations.) The idea of free trade is that people should be free to trade with anyone they want without restriction. Often it includes a proposal that work should be outsourced so that it’s more efficient and saves time and money. This is usually presented as the idea of hiring skilled labour. But in practice, there are a few problems with this.

Trading without restriction is almost impossible in the world we live in. Almost every federal government has special trade agreements with certain other governments and organizations that either limit or obligate trade with them. The United States’ trade embargo with Cuba is one of the most famous examples of this, and rules like “you can’t trade with Cuba” make free trade pretty much impossible. You see, if there are restrictions on trade, it’s not free. Likewise, the goods from certain countries might have high tariffs on them if you’re importing them, discouraging trade with them. On the other hand, low tariffs would encourage trade with certain other countries. See what I mean?

Outsourcing to the developing world

The idea that we should outsource work to skilled workers isn’t an inherently bad one, but the trouble is that the focus is on spending the least time and money. In practice, often what we see is that these ideally “skilled” labourers aren’t especially skilled. We hear statements like, “China is great at making consumer goods,” when in fact the work doesn’t require a ton of special skill. For the most part, the workers aren’t particularly well-suited to the industry, they just happen to live somewhere that makes it easier to pay them a fraction of what their work is worth. And that’s a problem, because any system that encourages you to outsource to another country just so that you can pay the workers less is a recipe for massive exploitation.

If you’re trading freely with people, theoretically you’re agreeing on a reasonable price with your supplier. The trouble is that the buyer has all the power because of subsidies.

Subsidies are government money that is given in order to help out producers. For example, the United States subsidizes cotton production, so that means farmers can produce their cotton cheaper in the US. On the other hand, India’s government isn’t giving all those subsidies, even though cotton is a major export crop. If an American farmer can produce their cotton for $10 while the Indian farmers can only produce it for $14, the buyer has no reason to trade with the Indian farmer. The power is not in the farmer’s hands. (FYI: I’m making up these numbers just as an illustration.)

Sometimes, what we actually see is that the Indian farmer, desperate to recuperate any money they can, will sell their cotton at a lower price and suffer a loss. Getting $10 for their $14 cotton is better than getting $0 for it, after all.

In essence, free trade is an idea that doesn’t exist. Conventional trade is what we end up with in practice when we try to force free trade in a system that isn’t free. You see a lot of exploitation and power imbalance, and the ones hit hardest are the producers. So I’ll use the terms free trade and conventional trade pretty much interchangeably in this article.

The answer to the question “what’s the difference between fair trade and free trade?” is basically the definition of fair trade itself.

Free trade says that there shouldn’t be any regulation, because then trade isn’t free. Well, as we discussed above, there is always going to be regulation. Fighting against it is not the way to improve trade for the environment, for workers and (ultimately) for consumers.

Fair trade does put rules in place because it recognizes that regulation is inevitable and we might as well encourage ethical behaviour with that regulation. What it doesn’t do is say that certain people can’t trade with one another by virtue of their location and so on. That’s a conventional trade issue.

Fair trade basically says: if you want to claim you’re fair trade, you need to behave ethically. You need to pay producers right. You need to protect your workers. You need to work in harmony with the environment. And if you don’t, you can’t be a member of our organization or put the Fairtrade Mark on your product. Which is the kind of thing that makes a lot of sense to regulate!

I’ve put together an infographic to show the impact that fair trade makes, when we compare it to the conventional trade system (free trade). Check it out!

This infographic shows just a few differences between fair trade vs free trade. Fair trade means more empowerment, respect and dignity for workers that are in the developing world. Whether we’re treating them right or not, it’s typically someone far away who makes our products. Why not make sure they receive the respect they deserve?

That’s why fair trade is so important. When we know this, the whole fair trade vs free trade debate is no contest. Rosette will continue to educate folks about this distinction, of course, because it’s at the heart of everything that we do!

Let us know in the comments: when did you first start questioning conventional trade? 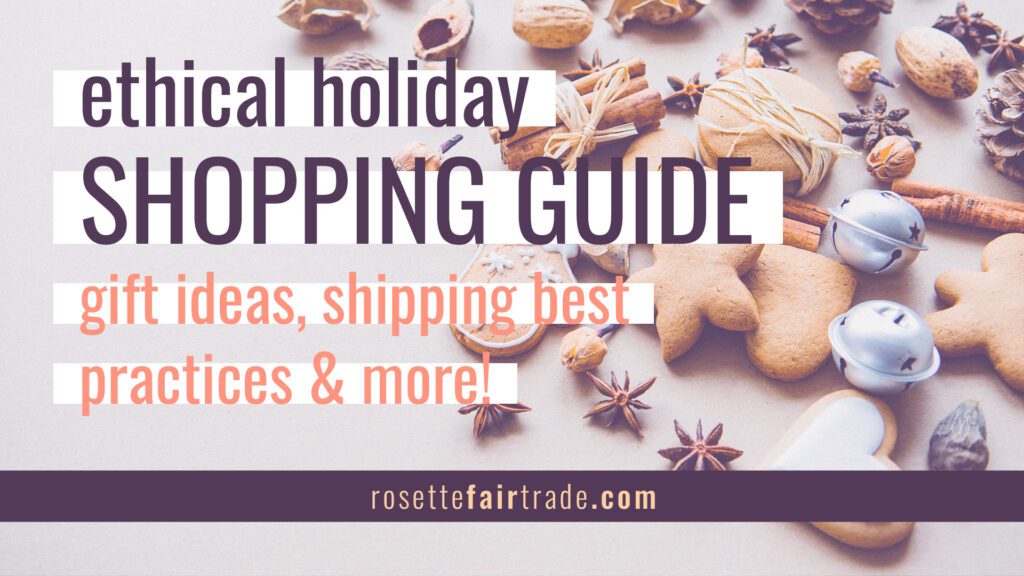 When I first sat down to write an ethical holiday shopping guide for 2020, I thought it'd be easy peasy. Just... 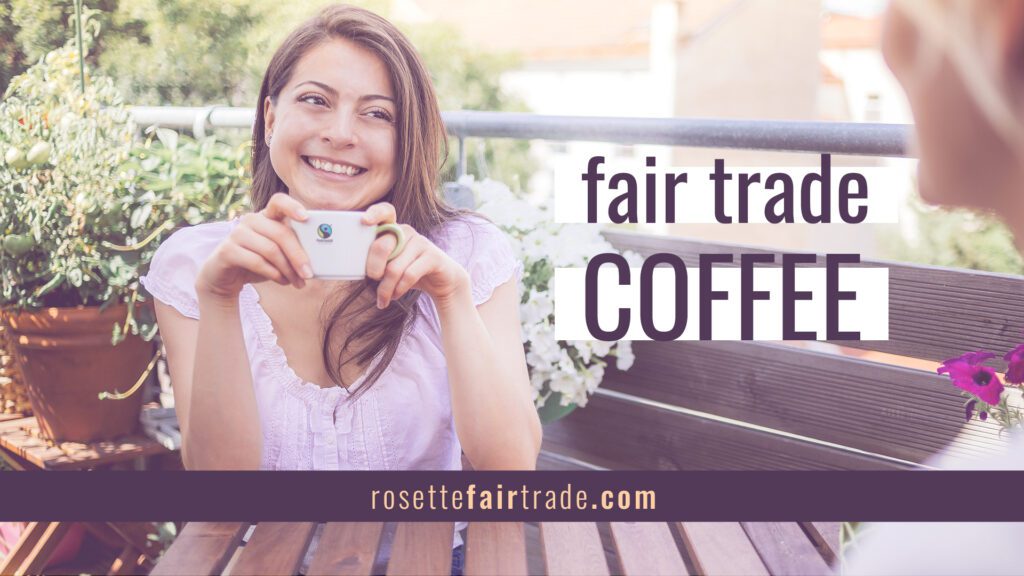 Fair trade coffee: why this classic still leads the way

Fair trade coffee is the best-known fair trade product out there. If you've ever mentioned fair trade to someone, there's a... 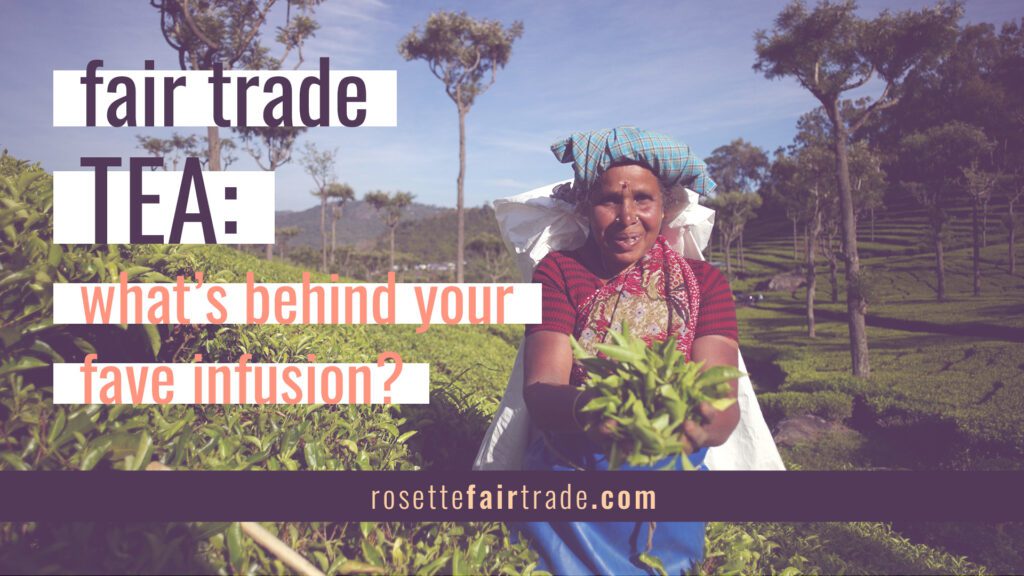 Fair trade tea is a beautiful thing. It's a good way to know how your favourite warm drink was produced, and...