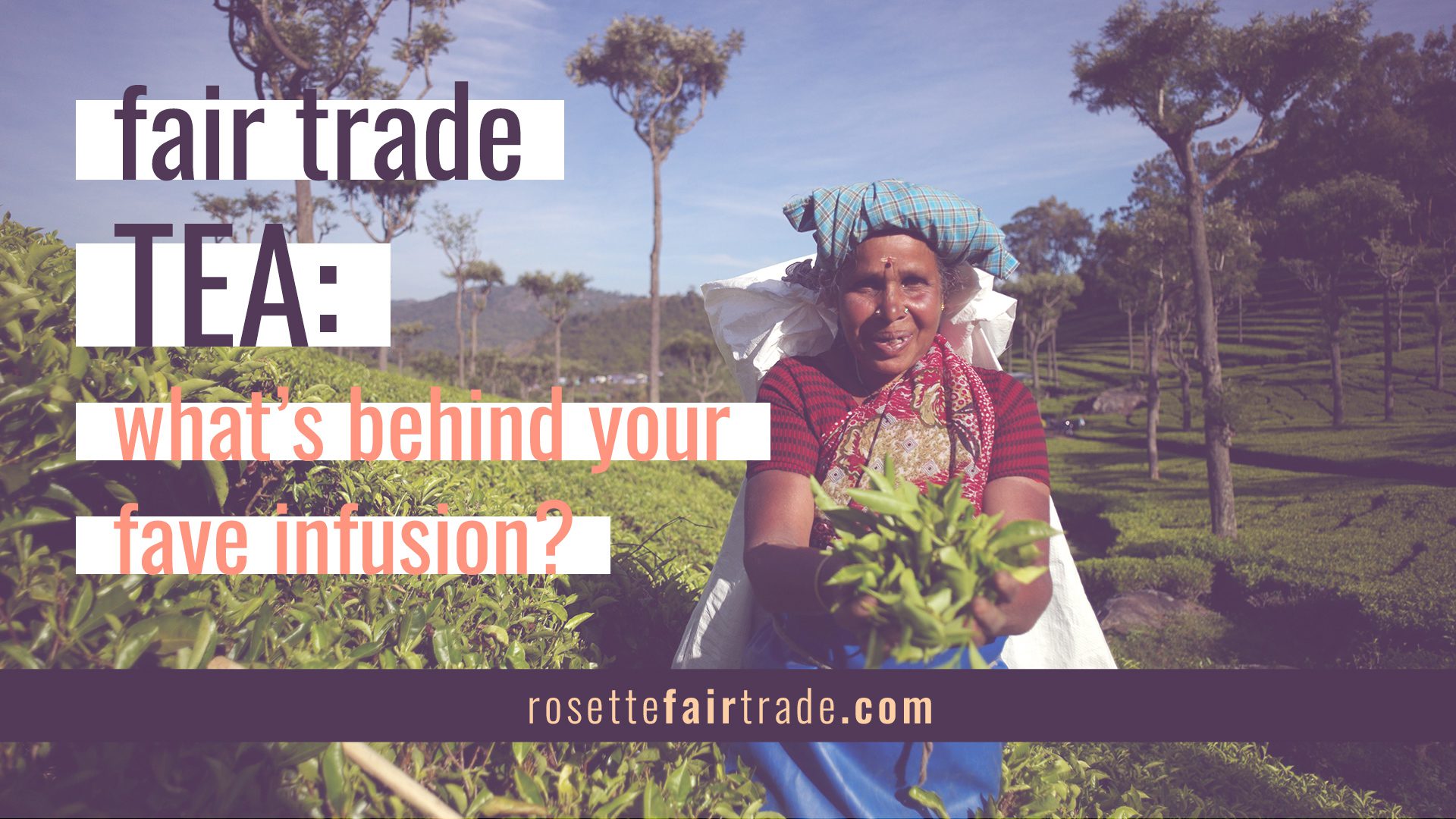 Fair trade tea is a beautiful thing. It’s a good way to know how your favourite warm drink was produced, and feel even better about it.

This is the third week of Fairtrade Month already! (Time flies when you’re trading fair!) Today I’m talking about fair trade tea. If you missed last week’s post on fair trade chocolate (cocoa), you can read that here: Fair trade chocolate: what it’s doing for women, children & the planet. And if you want to catch up on the week before that, where I talk about fair trade sugar, check it out here: Fair trade sugar makes Fairtrade Month extra sweet! They’ll get you up to speed on what I’ve already covered.

But now, let’s turn to tea.

First things first, let’s learn a little bit about how tea is grown and processed, so that we’ve got a solid foundation.

How is tea made?

And then, of course, there are herbal teas like rooibos that are technically not tea, but rather a tea-like infusion. I won’t cover the production of every type of infusion today because I’d be here a very long time! I’ll just go over how tea is made.

First things first: tea needs to be grown. As I just mentioned, most tea comes from the same plant, which has beautiful green leaves.Those leaves are plucked by knowledgeable tea pluckers, to ensure they’re the best quality. For black and green tea, apparently two leaves and a bud make the best tea!

Once the tea is plucked, it needs to be processed as soon as possible for optimal freshness.

If the tea leaves are going to become black tea, the typical processing begins with wilting the tea to soften the leaves and stems. Then the leaves are rolled, oxidized and dried. Rolling gives the tea leaves a sort of twisted appearance and releases enzymes that will oxidize when left to interact with the air. Even though they start out green, this process turns the leaves the reddish-brown colour we recognize as black tea. It also helps develop a more fruity flavour in the tea. Then, it’s dried so that it stores longer.

If the tea leaves are destined to become green tea, the leaves are typically processed in some way to de-activate the enzymes that oxidize. Sometimes this is done by pan-drying the leaves, and other times they’re steamed to eliminate the enzymes. Without oxidization, the leaves stay a greener colour and have that more distinctive, herbal flavour that we associate with green tea.

For white tea, typically different leaves are used. They come from the standard tea plant (the same as is used for green and black tea), but only very young leaves are used. Unopened, bud-like leaves are said to be best for white tea. They’re dried right away, but the enzymes aren’t de-activated like green tea. The drying slows oxidization but doesn’t eliminate it, so it’s considered semi-oxidized. This gives it the signature, delicate flavour that is lighter than black tea but less “green” than green tea.

I hope you feel like a tea expert now, because you now know more than most folks will ever know about tea production! 🙂

That’s a complicated question, but I’ll do my best to answer it!

Tea is one of the world’s few major crops that actually prefers to grow in what’s called a monoculture. So while, for example, coffee loves being shade-grown alongside fruit trees, tea doesn’t. It likes being on its own, only surrounded by other tea plants. So you’ll find that tea is typically grown on a plantation, which poses difficulties, of course.

Clear-cutting land for tea plantations is very challenging to the environment. Without mentioning names, large companies will usually clear-cut large areas to grow their tea “in-house” as opposed to buying from existing producers. This lets them have complete control over production and makes it easier to cut corners and reduces transparency, because they’re only accountable to themselves. On top of that, how these companies acquire the land is anyone’s guess—that is, it could be ethically acquired or acquired through a land grab. These are just a few reasons why fair trade is so important; it works with existing, smaller producers to tip the power imbalance.

Fair trade tries to focus on biodiversity and smallholders, to protect the environment. When it comes to tea, grown on plantations, sometimes it’s not a super small farm that grows diverse crops, so it’s a challenge. Now workers that don’t own the farm may be introduced, which makes it important to look out for their wellbeing, too. And minimizing environmental harm is also crucial, so many fair trade teas are also organic. Even if the tea plants prefer a monoculture, at least we can avoid spraying harmful chemicals on the crop!

Did you know that Fairtrade Certified tea is grown in over a hundred producer organizations, all around the world?

These numbers are super promising! Fair trade tea is a popular commodity among consumers who want to vote with their dollar!

In Canada, we’re lucky to have many great options in terms of fair trade tea! This includes Tega Organic Tea, Qi Teas, JusTea, and so many more.

Regardless of which type of tea you enjoy, there are fair trade options for you! By choosing fair trade tea, you’ll contribute to the empowerment of tea producers across the world and help to preserve the environment.

That’s all for this week, but next week will be all about fair trade cotton and clothing! Join us for that next Monday. See you then!

One Thought to “Fair trade tea: what’s behind your fave infusion?”