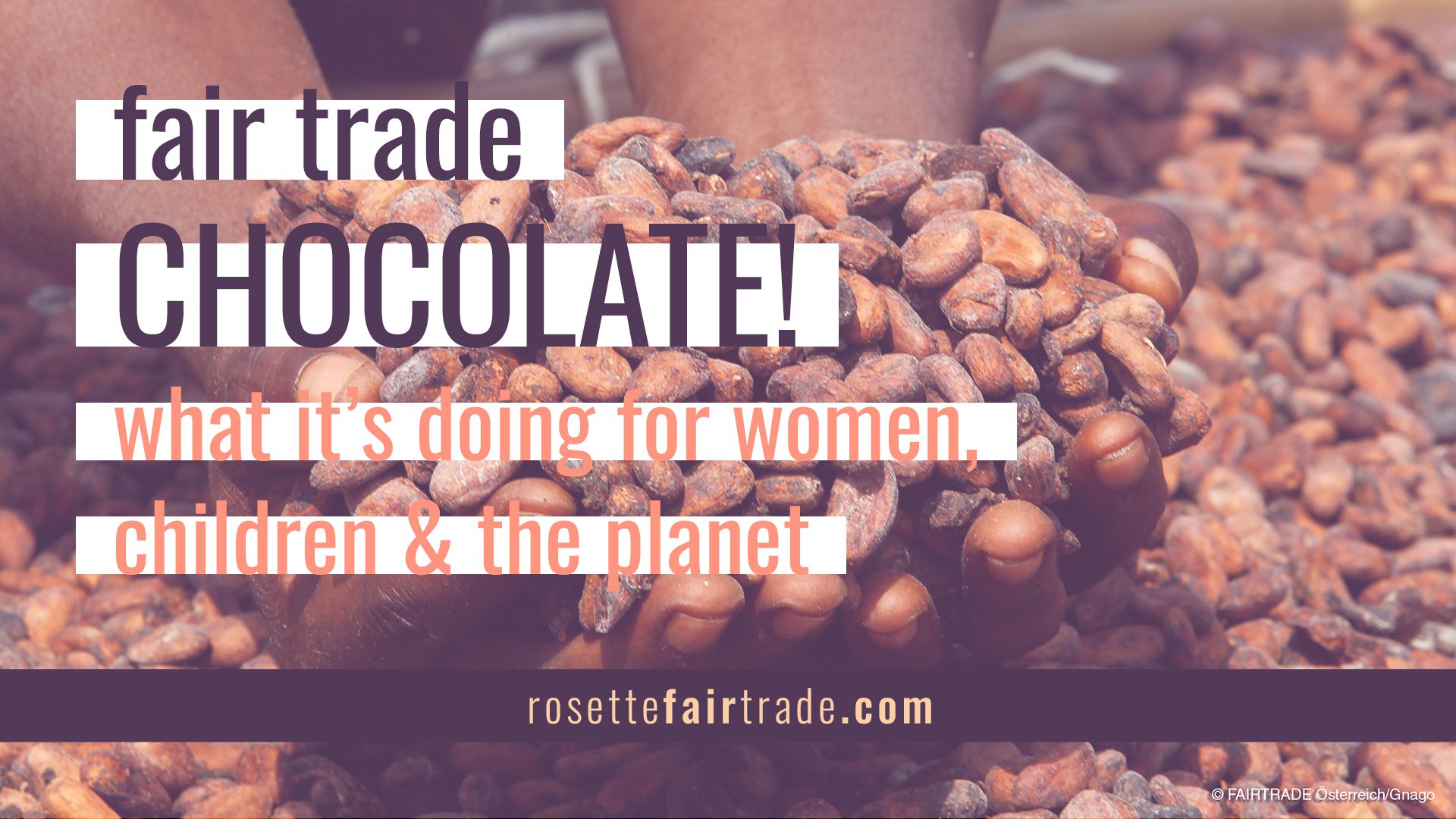 Fair trade chocolate may be a modern idea, but the growing and eating of cacao has enriched human lives for millennia.

Today, I’m going to focus on chocolate, and there are a few reasons for that.

One very timely reason is that Rosette is about to close chocolate shipping for the summer (deadline is May 15th!), so it’s a good reminder to get your chocolate orders in if you’d like some before autumn is here!

Another (less specific) reason is that a lot of conventional cocoa production is bad. Like, really bad. I don’t even know if I can impress on you just how bad it is. But I’m going to try to show you the difference that fair trade makes, because it’s huge.

To begin with, I’ll do a quick overview of how cocoa grows, so we’re all on the same page.

How is cocoa grown?

Cocoa pods grow on trees and can be red, green or purple. Pods look like oblong ovals, kind of like a stubby cucumber, and inside they have cocoa beans that are covered in a white, fibrous coating. The beans are fermented in this coating so that it sloughs off and the rich, brown beans are revealed underneath.

Because cocoa pods grow on trees that can get quite tall, there isn’t a very efficient mechanical way to harvest them, so they’re harvested by hand. This usually involves a sharp knife and can cause serious injury if proper safety protocols aren’t followed. Unfortunately, in West Africa, where most of the world’s cocoa is grown, this task is often completed by children who should be in school and planning for their future. What’s more, there is a very serious child trafficking problem in Côte d’Ivoire and it’s estimated that as of 2018, there were around 800,000 children enslaved in the cocoa industry.

It’s important to mention that cocoa farmers turn to this kind of practice because the prices of cocoa have been well below the cost of reasonable production for many years now. Farmers find themselves in a position where they have to cut corners wherever they can, and sometimes that means purchasing a child slave (as young as 8 years old) for less than the cost of an iPhone. If that doesn’t horrify you, I don’t know what will.

Once the cocoa pods are harvested, they can be split open to reveal the white-covered beans, which will then be fermented and dried. This gives us the cocoa beans we’re used to seeing. Those can then be ground up to make chocolate liquor (a mixture of cocoa butter and cocoa solids/powder) and that is either used as-is or divided into cocoa butter and cocoa powder. Cocoa powder is also sometimes called cocoa solids.

More and more folks are aware of the social problems in the cocoa industry, but only recently are consumers becoming aware of the environmental challenges.

Small-scale farmers are overwhelmingly the ones who protect the natural habitat of wildlife and avoid clear-cutting. However, we’re seeing more and more deforestation in West Africa as large cocoa plantations are made at the expense of the environment. Clear-cutting for cocoa crops not only harms the local wildlife and biodiversity (which are themselves important for maintaining balance within the ecosystem), but it also contributes to soil erosion and depletes the quality of the soil.

Because of so many larger companies that are implementing their own so-called “ethical” and “sustainable” cocoa projects, we’re seeing more plantations. When companies proclaim themselves ethical or sustainable, there is unfortunately nothing to keep them from profiting from it—except the critical thinking that consumers can exercise. If no third party is overseeing what they’re doing, there’s nothing to keep them from doing whatever they want to keep prices down. The words ethical and sustainable are not regulated by labelling authorities, so they don’t really mean anything in the context of marketing. For that reason, it’s not false advertising to harm the environment and then call your cocoa sustainable.

Fair trade helps deal with this, by having clear standards and a Fairtrade Mark the qualifying companies can put on their product. And that’s easy to regulate.

Because fair trade means that a minimum price must be paid to cover production costs, Kouadio N’Drie and others like him can better cope with the unpredictability of the climate. Without a fair trade arrangement, he would likely also have to cope with volatile market prices, as many non-fair trade cocoa producers do.

Fair trade is also helping by creating standards that require environmental protections, which give small-scale producers a leg up because they are naturally less hard on the environment. This gives fair trade producers better access to markets where sustainable products are in higher demand.

Fair trade cocoa beans are important because fair trade means the farmer is getting a reasonable price for the produce. Instead of getting a super low payment that forces the farmer to resort to unethical practices to survive, fair trade producers receive a fairly-negotiated price that considers the cost of ethically producing their cocoa beans.

One of the fair trade principles is making sure that children are protected and going to school so that they have a good future ahead of them. This means that everyone who’s working on fair trade cocoa farms is a consenting adult and being fairly compensated for their work. Basically, what we’d expect for ourselves if we started a new job.

Fair trade cocoa is also typically produced in a cooperative, which is great for a few reasons. One, it helps the farmers be more efficient with their resources because they can share many things, such as processing facilities. They can also pool their produce together for a larger crop, so that they can approach larger buyers and advocate better for themselves. And finally, cooperatives focus on education between their members, so if one farm’s cocoa is better-quality or producing a higher yield, knowledge sharing can happen in order to improve the results of other members of the cooperative. This, in turn, improves their income and means they can provide better for themselves and their families.

Did you know that fair trade chocolate has been on the rise for years now? More and more people are realizing the abuses that can happen when we don’t pay farmers a fair price for their cocoa beans, and consumers are doing something about it!

These stats are encouraging, but there’s always room to grow until nobody at all is harmed in the production of our chocolate treats!

Meet Emma Georgette. She’s a fair trade cocoa producer from EKOOKIM in Ivory Coast (Côte d’Ivoire). Emma Georgette helps to grow much of the cocoa that is used in the Oxfam Fair Trade chocolate that we have in the Rosette store.

She says, “Since I am member of the cooperative, my life has changed. With the support of the cooperative and the agricultural training I could increase my cocoa production and thereby increase our income as well. We are really happy.” Emma Georgette is one of many cocoa producers whose work in the cocoa industry is now treated with dignity and respect, thanks to fair trade. She receives a living wage for her work, so that she can provide for herself and her family, rather than suffering abuses in her place of work.

This is why it’s very important to put a face on our food. Meeting the people behind our fair trade chocolate creates a connection and reminds us that there are real people whose lives are impacted by our choices. Faceless products means that we can easily look the other way, even if there are abuses going on in the making of our favourite chocolate.

Fair trade also helps to even out gender inequality. Emma Georgette is able to self-determine in ways that many female farmers can’t. This is because fair trade requires that gender non-discrimination be included in producer organizations. This means that women can hold jobs that men might traditionally hold, and that women don’t get paid less just because they’re women. Because of this, programs like the Women’s School of Leadership are going strong and help to empower women in agriculture.

Whatever brand you choose, make sure you’re looking for Fairtrade Certified chocolate so that you can be part of the solution! Your fair trade chocolate purchase makes sure that fewer and fewer cocoa workers are being exploited.

Join us again next week when we discuss fair trade tea! In the mean time, don’t forget that the chocolate shipping deadline is May 15th and you should get your order in by then so that you’re all stocked up!

2 Thoughts to “Fair trade chocolate: what it’s doing for women, children & the planet”